an amazing event occurred involving a male bear cub and a female wolf cub. The shy bear cub tended to avoid the other bears and to feed alone. If larger individuals appeared, the young cub would quietly depart.
This scenario continued for several nights. Then a light coloured female wolf cub joined the young bear. She, too, kept herself to herself, avoiding conflict. I called them Romeo and Juliet. Romeo’s behaviour emboldened Juliet. Romeo sat at a funny attitude at the dinner table and appeared inquisitive but friendly when Juliet guardedly crept up to the same table. From her attitude it was obvious that Juliet was prepared to flee immediately if Romeo disliked her. Tail between her legs and her entire body tensed, the wolf cub finally summoned up the courage to eat off the same plate as the little bear.
In the realm of the bears I had never before seen an individual which did not in one way or another behave threateningly towards a wolf, if not by actually charging, at least by emitting that characteristic smacking together of the jaws  or a low-pitched warning growl.
Had the two been members of the same species one would have surmised that  deeper feelings were at work. But a wolf and a bear - huh! In fact, their friendship actually grew night by night. Romeo would appear first. Not long afterwards Juliet’s pale form could be discerned in the forest. As soon as it became evident that no other bears or wolves were feasting, she would join her friend. At its best the distance between the two heads as the animals sank their teeth into the food was a mere 30-40 cm.
This unusual love affair lasted for well over a week before the animals went their separate ways. Later, I saw Romeo several times but he was always alone. Juliet, on the other hand, could be seen hanging out with her relatives. It is highly characteristic of wolf behaviour for the pack to disperse, only to gather again in a variety of compositions – eve 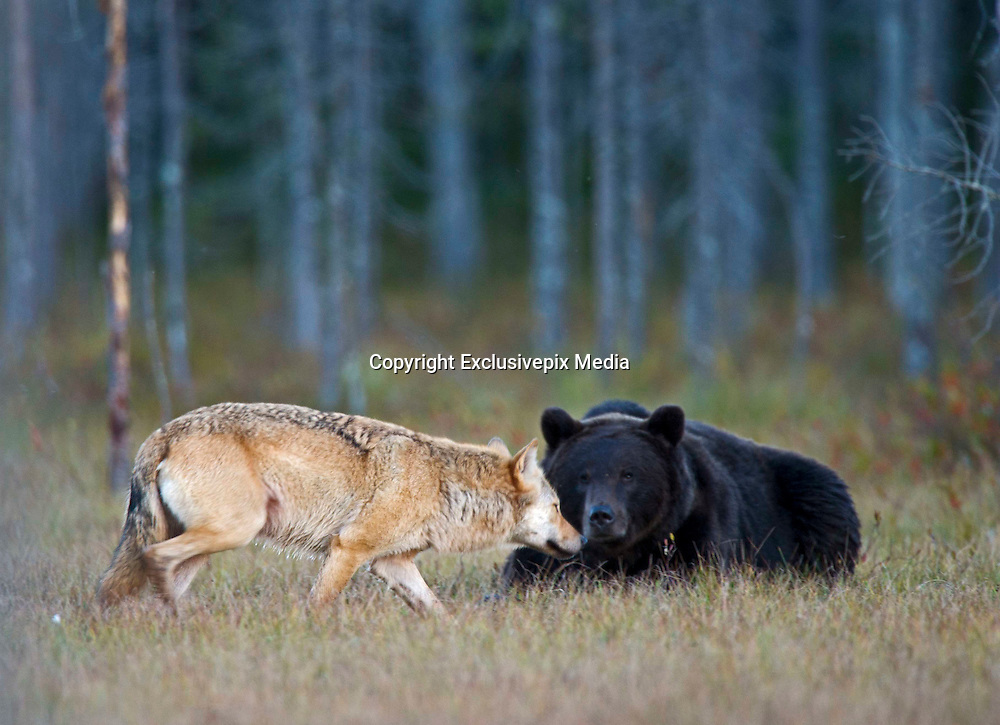