Meet Zeus: The rescued Blind Owl With Stars in His Eyes

Meet Zeus: The rescued Blind Owl With Stars in His Eyes

Zeus came to his lifetime home at Wildlife Learning Center, in Los Angeles California, in the summer of 2012. He was found emaciated and blind in front of someone’s house in Central California. A veterinary ophthalmologist thoroughly examined him, brought him back to health, and deemed him nonreleasable because he only has about 10% of his vision and would not be able survive in the wild on his own.

Specifically he has been diagnosed with conjunctivitis, corneal degeneration, endotheliopathy, anterior uveitis (presumably from a traumatic event like flying into something or being attacked by a predator), his general condition is a capsular cataract, the white flecks that glisten in his eyes is caused by unique fibrin/blood pigment clots. These pigments cause a unique “view of the Universe” quality in his eyes, for which he is well known, hence the name Zeus. He isn’t in pain and appears to be healthy in every other way. He has his regular check up this Thursday.

Zeus exudes a very peaceful presence and is very calm. He has a very big personality and exhibits a bit of a curious nature. WLC Cofounders, Paul Hahn and David Riherd, say they have never seen anything like this unique manifestation of pigment clots giving “starry” appearing eyes in their 40+ combined years of working with rescued wildlife.

Zeus enjoys perching either in his hollowed tree trunk or on top of it above Cofounder Paul’s desk in the office at Wildlife Learning Center. He is so camouflaged most people don’t notice him until we point him out. Many other people see him but believe he is a stuffed animal because he is so calm and peaceful. He sleeps a lot, as owls are crepuscular (mostly active at dawn and dusk). When he wakes and opens his eyes, people gasp. We have had people almost in tears when he reveals his peepers.

People that meet him for the first time say it almost looks like celestial constellations in his eyes. I 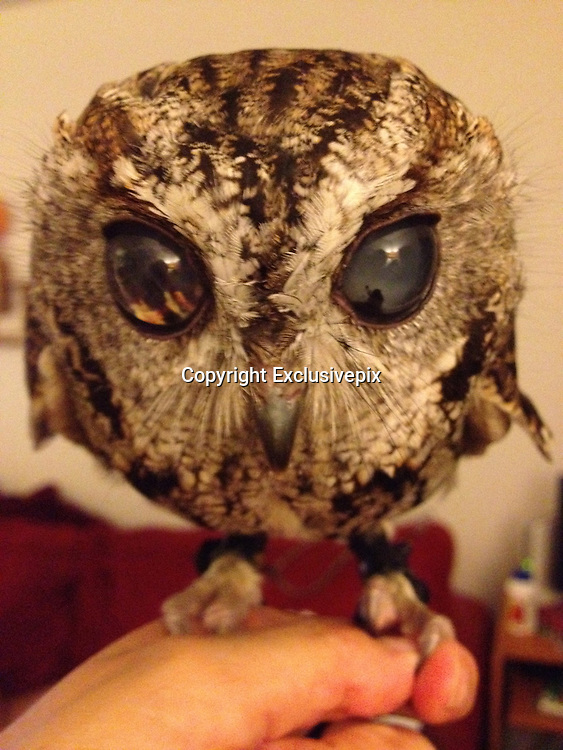