photographer Kawika Singson with his shoes and tripod in flames due to the intense heat of lava.

photographer Kawika Singson with his shoes and tripod in flames due to the intense heat of lava.

Singson is an extreme hiker and landscape photographer based in Kailua-Kona, Hawaii. Over the years, he has photographed in countless locations all over the Big Island, often in locations that the

general public would find very difficult to get to. He “has taken many risks to capture just the right shot to share with the rest of the world,” he says.

The photograph above was shot last week on July 4th, 2013. When we asked Singson about the location, he wouldn’t reveal anything aside from the fact that it was in Hawaii. “I don’t like giving out my locations,” he said. “It’s a secret. Plus, I don’t want people to go there and get hurt.”

It may look too crazy to be true, but Singson insists that it’s a genuine photograph: “That’s real lava real flames and it was really hot! I could stand the heat only for a few seconds.”
Singson says that this is the first time he has had his clothing and/or equipment catch on fire while photographing near lava. His shoes have started smoking before, but he had never seen flames.
It should go without saying, but you shouldn’t try this stunt at the volcano near your home. It’s incredibly dangerous due to the fact that it’s possible to fall through the thin layer of rock into the molten lava below, just like one would fall through ice on a frozen lake. Singson tells us that “there was only a thin layer of solid rock on top of the magma” where he was standing.
©Chris Hirata/Exclusivepix 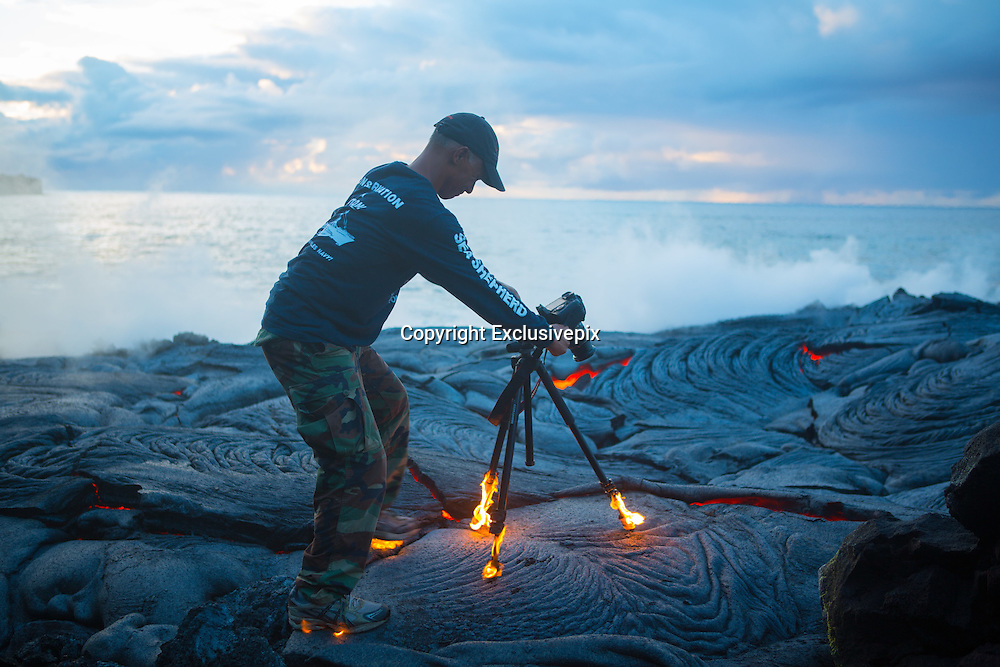