It looks like this man has had the folds of his brain tattooed across his head - but instead this is a rare medical condition.
The skull of the 21-year-old Brazilian patient, described this week in the New England Journal of Medicine, looked perfectly normal two years ago.
But then his scalp started to change, growing thicker in irregular places, resulting in bizarre folds of thicker skin across his head in a pattern that unintentionally mirrors the shape of the brain.


Two Brazilian doctors studied the un-named man's condition - a rare one known as 'cutis verticis gyrata' - and reported no other symptoms affecting the man.

While he is described as a 'intellectually impaired', he does not have any psychiatric or neurological conditions and his poor performance at school is not said to be linked to his scalp condition.

Instead the condition is benign, if bizarre, and affects him only cosmetically - in fact, the man is said to be quite proud of his condition.
Dr. Karen Schons a dermatologist at the Hospital Universitario de Santa Maria, who studied the patient, said: 'The patient did not have the habit of covering his head ... The condition did not bother him cosmetically.
'It's a benign and essentially aesthetic condition.'
Cutis verticis gyrata occurs more commonly in men, and usually develops shortly after puberty.
The cause of the deformation is not known, although sometimes it does seem to correlate with brain-related disorders such as schizophrenia and seizures.
While surgery can improve the appearance of the scalp, it is costly, and requires regular follow-up treatments - and as this man is happy with his looks, in this case it was not required.
©exclusivepix 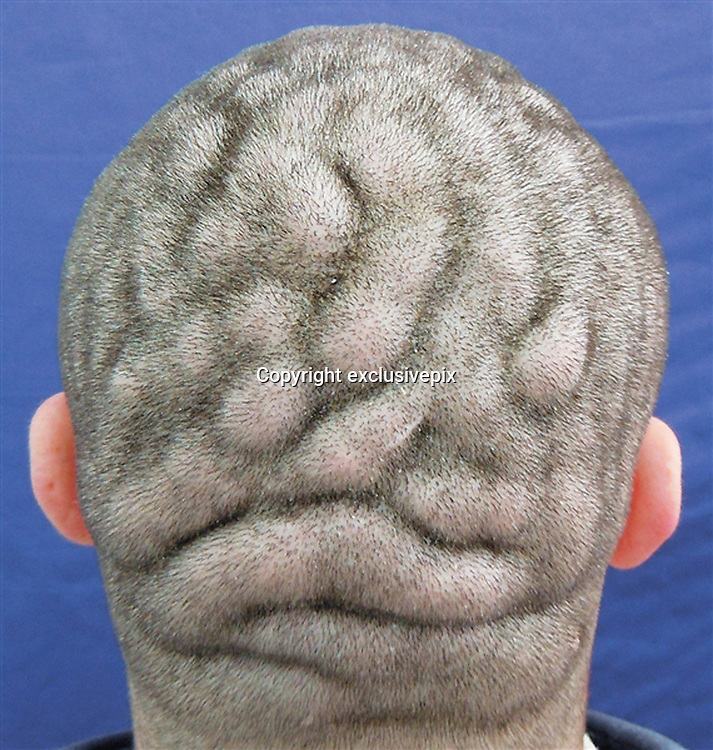