'He has his life back': U.S. doctors give gun accident victim a new face, tongue and jaw in most extensive face transplant ever

'He has his life back': U.S. doctors give gun accident victim a new face, tongue and jaw in most extensive face transplant ever


A 37-year-old man injured in a 1997 gun accident has been given a new face, teeth, tongue and jaw in what doctors say is the most extensive face transplant ever performed.
Officials at the University of Maryland Medical Center announced today that Richard Lee Norris is recovering well after last week's 36-hour surgery.
He is beginning to feel his face and already brushing his teeth and shaving. He's also regained his sense of smell, which he had lost after the accident.

For 15 years, Mr Norris lived as a recluse, hiding behind a mask and only coming out at night time.
The transplant will give him his life back, said Dr Eduardo Rodriguez, the lead surgeon.
'It's a surreal experience to look at him. It's hard not to stare.
'Before, people used to stare at Richard because he wore a mask and they wanted to see the deformity,' Rodriguez said.

'Now, they have another reason to stare at him, and it's really amazing.'
The surgeons are calling it the world's most comprehensive face transplant which allowed the Virginia man to emerge from behind his mask after 15 years.
When he shot himself in the face in 1997 he lost his nose, lips and most movement in his mouth. He has had multiple life-saving, reconstructive surgeries but none as successful as this.
He received the new face from an anonymous donor last week whose organs saved five other patients' lives on the same day.
Six days after the surgery, he can already move his tongue and open and close his eyes and is recovering much faster than doctors expected.
'He's actually looking in the mirror shaving and brushing his teeth, which we never even expected,' said Dr Eduardo Rodriguez, associate professor of surgery at the University of Maryland School of Medicine and head of the transplant team, who spoke at a press conference.
When Norris opened his eyes on the third day after the surgery with hi 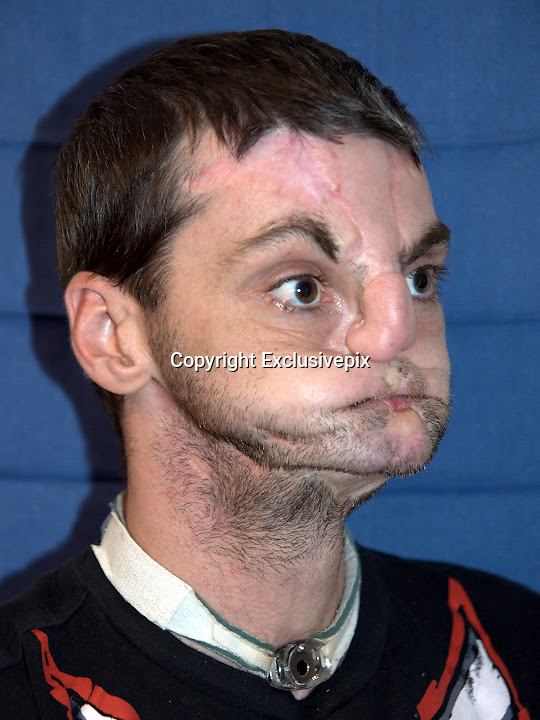