Solved! How A Family Of Eight Can Travel From A To B... On Just Two Wheels

Solved! How A Family Of Eight Can Travel From A To B... On Just Two Wheels

China - How does a large family commute anywhere if they have no car and little money? As this picture proves, there are no problems, only solutions. What appears to be an entire family of eight have all piled cheerfully on to one motorcycle. The three children, two men, two women and a baby are clinging to one another tightly, their hair blowing in the breeze - as they are, of course, compounding their danger by riding without helmets.
Their lives appear to be in the hands of one of the men - clad in a dark purple shirt, he is the driver. His control of the motorbike is compromised by the three children crammed on the saddle in front of him however. One hopes they only have to travel in a straight line, as he will find it very difficult to turn the bike with the three children there. Of course, the weight he is carrying on the back of the motorbike will not help either. To go around corners on a motorbike, the driver must lean into the turn. That is always more difficult to do when carrying a passenger - if the passenger does not lean with the bike also, or if they lean too little or too much, the driver could lose control. Unless you are an experienced rider, that's difficult enough to manage with one passenger. With seven, it must be just about impossible. The driver will also find stopping difficult. When you stop on a motorbike, you have to put your feet down to balance the bike and keep it upright. But the weight of seven other people on the bike will be too much for the driver to support on his own, so the adults will have to put their feet down also at any stoplight. They will all have to then make sure they lift their feet in tandem as the driver starts again - if he tries to accelerate while one person still has their feet on the ground, the entire operation could fall apart. Photo Shows: It's hard to tell where the family are - though, fortunately for them, the sun is shining. 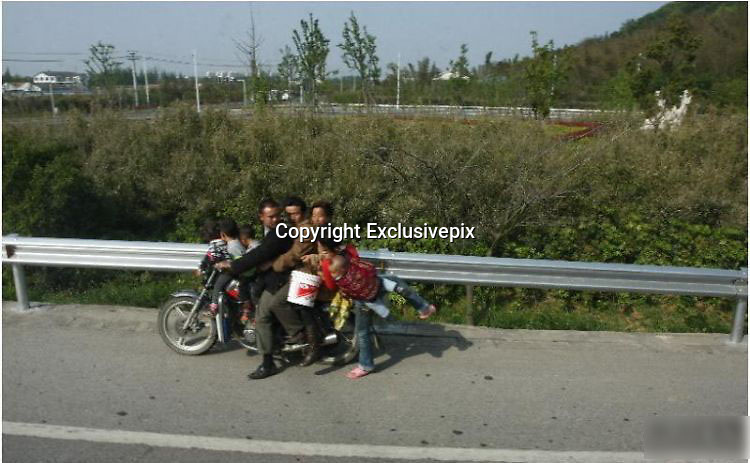