Pet Dog Survives After Being Stabbed in Forehead

A family's pet dog has miraculously survived after would-be burglars plunged a knife 12 centimetres into her forehead, directly between the dog's eyes.
Bella was seen happily running in the street minutes after she was brutally attacked by criminals she had prevented from breaking in.
The brave six-year-old Alsatian/terrier cross breed didn't appear to notice the large knife's handle protruding from her forehead.
Bella was attacked on in the early hours of Saturday morning while defending a neighbour's property in Stellenbosch, South Africa.
Owner Vernon Swart said his next door neighbours telephoned him to tell him that they had spotted a burglar trying to break into their house Mr Swart, 52, said: "They said they had spotted someone in their garden, but when they saw them, the guy ran off.
"Then they looked outside and saw Bella running in the street with a knife in her head.
"I couldn't believe it when I saw her.  She hardly seemed to have noticed at all.
"It was absurd, it must have gone 10 or 12 centimetres into her head.  I couldn't understand how she survived.
"We rushed down to the vet's.  But Bella was quite happy.  On the way there she was banging the knife against the car's window.
"While we were waiting for the vet to open my wife took a picture of her with the knife in her head.  "The vet couldn't believe what he was seeing either.  He gave her a general anesthetic and had to put his knee against her head to pull the knife out. "She had five or six stitches and then woke up in front of the fire half an hour later.  She didn't even seem to realise what had happened. The married South African artist and musician, a father of two, went on: "Bella usually goes for people she doesn't recognise and she would have definitely tried to stop any burglars either in our house or next door.  "We think they must have stabbed her while she was doing that.
"But it's v 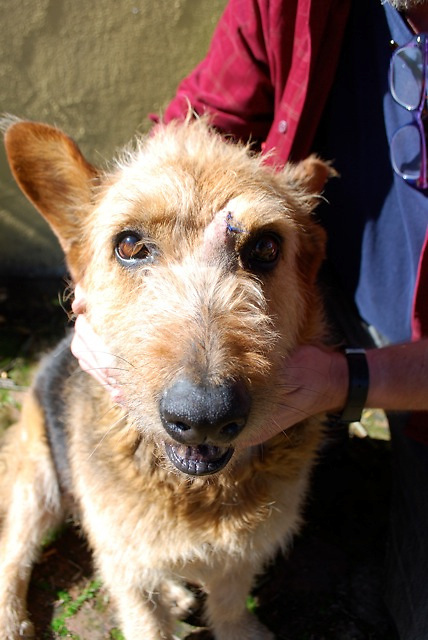