The Cardrona Bra Fence of Central Otago, New Zealand, began in 1999 some time between Christmas and New Year, when four women's bras were found attached to the wire fence alongside the road. It's not known who did it and why, but rumor is that a group of women were celebrating the new year at the Cardrona Hotel, and after leaving the pub late at night, they decided to take off their bras and hang them on the fence. The sight of female lingerie fluttering in the wind inspired more women to leave their undergarments, and by the end of February 2000, the original four were joined by sixty more. As news about the fence spread, even more bras started appearing. In the following years the bra population multiplied to thousands and the fence became a unique tourist attraction gaining worldwide attention. Unfortunately, not everyone was pleased. Some viewed the fence as an eyesore and embarrassment and also as a potential hazard to drivers using the road. Over the years, the fence was stripped off the bras on numerous occasions. But the bras returned each time. The first attempt at clearing was made just two months after the first bras were attached. Another attempt was made in October 2000 when a few unknown persons removed some 200 bras from the fence. In 2006, even the Queenstown Lakes District council stepped in and removed 1,500 bras from the fence. But the fence started rebuilding its collection again. Later that year, an attempt to make the world's longest bra chain was made. The world record fell woefully short by more than 100,000 bras but managed to raised over $10,000 for charity.
The Cardrona Bra Fence continues to be attacked periodically, and depending on when you visit, you might or you might not see the undergarments. But rest assured, the bras will return.
©Exclusivepix media 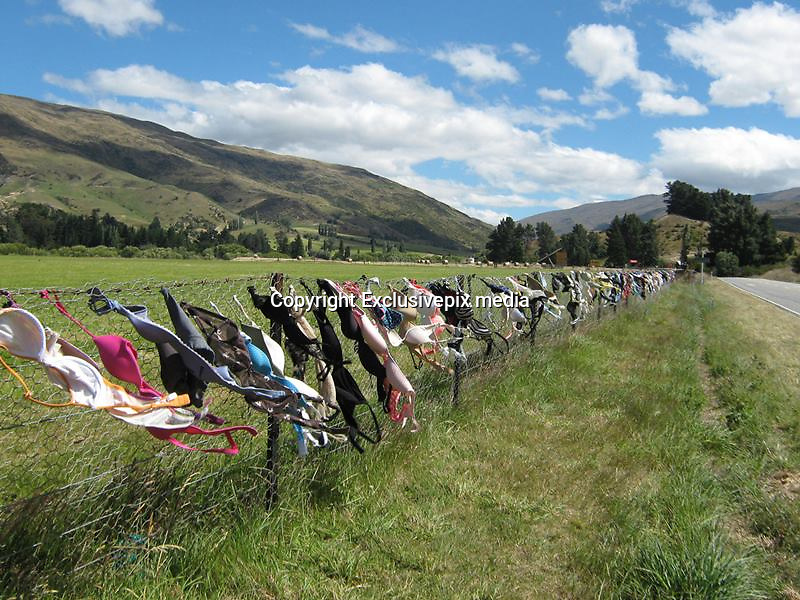