In the bath tub and on the ski slope: Photographer recreates a host of childhood holiday snaps 20 years on with her sisters

In the bath tub and on the ski slope: Photographer recreates a host of childhood holiday snaps 20 years on with her sisters

A Finnish photographer set out to recreate childhood holiday pictures taken by her father 20 years ago with amusing and touching results.
Wilma Hurskainen rounded up her three younger sisters and set off for the destinations they visited with their parents - and this time she directed the shots herself.
The four siblings did their best to mimic the original images, which were taken between 1986 and 1990. They struck the same poses and imitated their facial expressions, acknowledging the difficulty encountered in family photos when everyone needs to look at the camera at the same time.
They even tried to pay homage to their '80s fashions by wearing the same colours and styles of outfit - sporting matching tops or hoodies in different colours.
In the series, titled 'Growth', Hurskainen snapped the scenes as closely as she could to her dad's efforts, to give a glimpse of how much the sisters have physically grown over the past 20 years.
The matching sailor dresses might now be a thing of the past, but the siblings effortlessly slip into their younger roles - and now they are even taller than their mother.

In one particularly poignant shot, the grown-up sisters pose on a sofa but cannot fully recreate the shot as their grandfather has since died.
Hurskainen wrote on her website that she would love to get her sisters together again for a new set of the photos as they get older.
The photographer told the My Modern Metropolis website: 'The most important thing is that in the end my sisters were pleased with the whole thing.
'It was sometimes a little hard finding the places of the original photos, finding the proper clothing and dealing with the emotions that emerged because of the process of digging up the past.'

Photo shows: At Castle Olavinlinna in their home country of Finland, the girls went for practical jumpers and trainers for exploring the 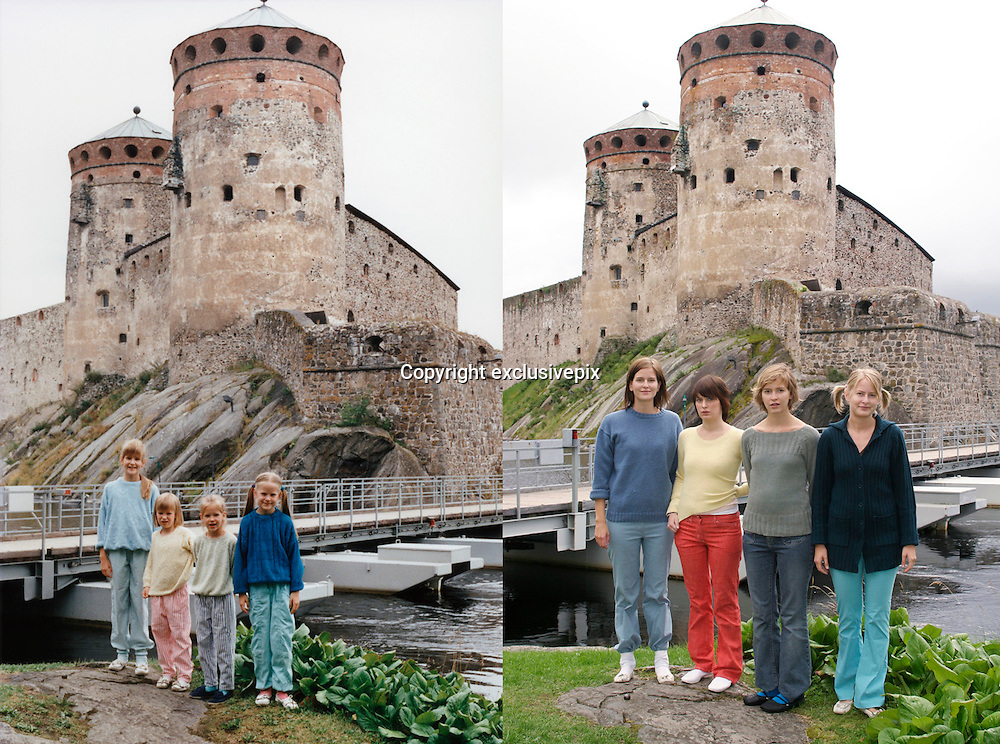