Is this the cutest dog in the world? Boo the Pomeranian has millions of fans and his own book

Is this the cutest dog in the world? Boo the Pomeranian has millions of fans and his own book


He has nearly two million fans and a book deal.
But Boo isn't a reality TV star, actor or a pop singer - he's a pet dog.
The five-year-old Pomeranian has the fame most celebrities dream of after amassing 1.79million fans on social networking site Facebook.
His owner, who has concealed her identity and location in the U.S. and uses the pseudonym J.H Lee told Time:'My friends loved looking at pictures of him.
'We started the first Facebook page as a joke.'
Boo shot to fame when he realised the key to looking so good in photographs is a great haircut.
The canine's unique look is down to an happy accident - his long hair was so knotted, it had to be shaved off.
Lee said: 'The groomer said they wouldn't even be able to get a brush through him.
'I was really upset when I heard that. But when I picked him up, I found he was actually really cute that way.'
Boo has been busy promoting his new book, a collection of photographs entitled 'Boo, the life of the world's cutest dog.'
The £8.99 book features exclusive photographs of Boo 'doing all his favorite things, lounging around, playing with friends, exploring the whole wide world, and making those famous puppy-dog eyes.'
And judging by his success so far, it's sure to be a bestseller
©Boo/Exclusivepix 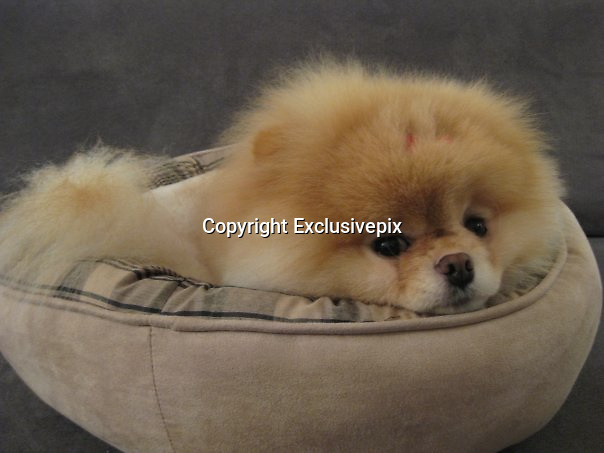