Lost Cat Reunites With Her Owner After 15 Years Apart

Lost Cat Reunites With Her Owner After 15 Years Apart

Three weeks ago, Tori Takayesu got a call from the Maui Humane Society shelter about her lost cat, but she had no idea what they were talking about.

"I was like, 'What cat?'" said owner ToriTakayesu . "And they said, 'Oh, we have your tortoiseshell tabby, and she's fine, and we're waiting for you to come by.' But I hadn't had a cat in 15 years."
Takayesu figured the shelter had made a mistake, and that someone — the cat's real owner — would eventually claim her. But no one did, and the shelter kept calling Takayesu. Over the weekend, an animal control officer even visited Takayesu's house to remind her about the cat waiting at the shelter.

"They said it was a senior cat," Takayesu said. "I was concerned that nobody would adopt her, and she'd be euthanized or something. I didn't want that on my conscience, so I decided to pull her out, whomever she belonged to."

Four days after the initial call from the shelter, Takayesu went to collect the mystery cat. The staff delivered the cat to Takayesu in a carrier. When Takayesu opened it, she got the biggest surprise.

"I opened it up, and I was like, 'Oh my god! That's my cat,'" Takayesu said. "It was crazy." The cat turned out to be James, a female cat Takayesu and her family had owned 15 years ago. She was named after a character in her son's favorite show, Thomas the Tank Engine & Friends. James the cat had first lived with the family in Kula, on the Hawaiian island of Maui, then moved with them 10 miles away to another part of Maui, Makawao.

"She was fine for a month [in Makawao] — she had the same routine," Takayesu said. "She'd come in at night, and during the day, she'd wander in and out. Then we noticed she didn't come in at night. We went looking for her and couldn't find her."

The family searched for a month, driving around each evening to look for her. They even went back to Kula, to see if she'd gotten disoriented and wandered back home. But she 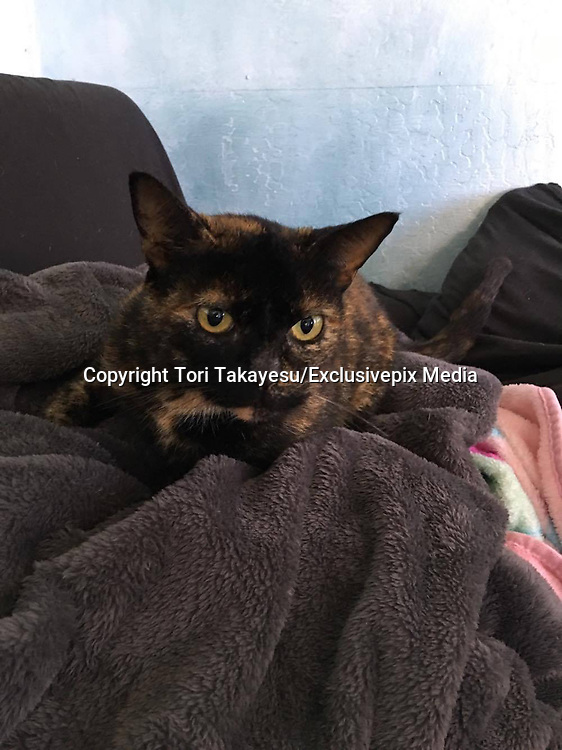