I'm a human lightbulb! The 16-year-old 'electric boy' from India can withstand shocking 11,000 volts without feeling a thing

I'm a human lightbulb! The 16-year-old 'electric boy' from India can withstand shocking 11,000 volts without feeling a thing

It's enough to make your hair stand on end.
An Indian teenager has told how he can withstand 11,000 volts passing through his body - and only discovered his bizarre talent by accident when he was repairing his mother’s heater.
Human electricity insulator Deepak Jangra can apparently resist the same amount of voltage required to power 500 houses and even sit with his hands inside a tub of water along with naked live wires.
The 16-year-old claims: ‘I have a gift from God. I feel very privileged. I have the power to do things no-one else can and I don’t intend on wasting it.
‘I used to be scared of electricity but now I am confident. I have tested myself over and over again and I will never get hurt. I can touch a live wire with my tongue and I know nothing will happen to me.’

Deepak, who is a student, first discovered that he can resist such high levels of electricity three years ago when he was fixing his mother’s portable heater.
He revealed: ‘My mother kept complaining that our heater was broken so I thought I’d take a look and try and fix it myself because we couldn’t afford to take it anywhere and pay someone to fix it.
‘I accidentally touched the live wire with my screwdriver but nothing happened - I didn’t get a shock. But at the time I assumed we must have had a power failure in our village.’

Two weeks later, Deepak got a movie stuck inside his DVD player and decided to take the machine apart to attempt to retrieve the disc.
‘I hit the live wires again but again nothing happened,’ he said.
‘This time I knew something amazing had just happened. I touched it again and again, and then went outside to check the power supply was ok.
‘That was the day I realised there was something unusual about me.’

Since that moment, Deepak has been experimenting with various devices of different voltages - and he has 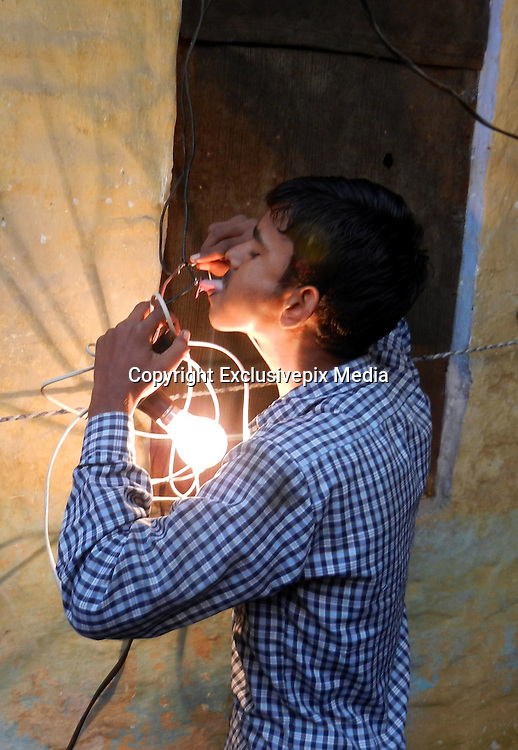