Neutrinos are one of the fundamental particles which make up the universe, but not in the way electrons, protons and neutrons are. These particles are extremely tiny, nearly massless and electrically neutral so they are not affected by electromagnetic forces and react very weakly with other particles of nature. Neutrinos are produced by the decay of radioactive elements in nuclear reactions such as in the core of the sun or exploding stars. Once born, they travel in straight lines at the speed of light passing through solid matter almost entirely unhindered. Although tiny, they carry a colossal amount of energy — some of these carry the same amount of energy as a well hit tennis ball. To detect these particles using the same technology they use at the Large Hadron Collider in Switzerland, one would require a ring of magnets the size of Earth's orbit around the Sun.
Neutrino detectors therefore use entirely different kind of science and technology. Some detectors use large tanks filled with water and surrounded by photomultiplier tubes that watch for radiation emitted when an incoming neutrino creates an electron or muon in the water. Other detectors have tanks filled with chlorine or gallium or other liquids. Neutrino detectors are often built underground, to isolate the detector from cosmic rays and other background radiation.


The Super-Kamiokande neutrino detector is located 1,000 meters under Mount Kamioka near the city of Hida, in Japan. The detector consist of a cylindrical stainless steel tank 41 meters by 39 meters holding 50,000 tons of ultra-pure water and surrounded by more than 11,000 photomultiplier tubes (PMT). It is one of the largest detector of its kind.
When a passing neutrino interacts with the electrons or nuclei of water, it can produce a charged particle that moves faster than the speed of light in water. This creates a cone of light known as Cherenkov radiation, which is the optical equivalent to a s 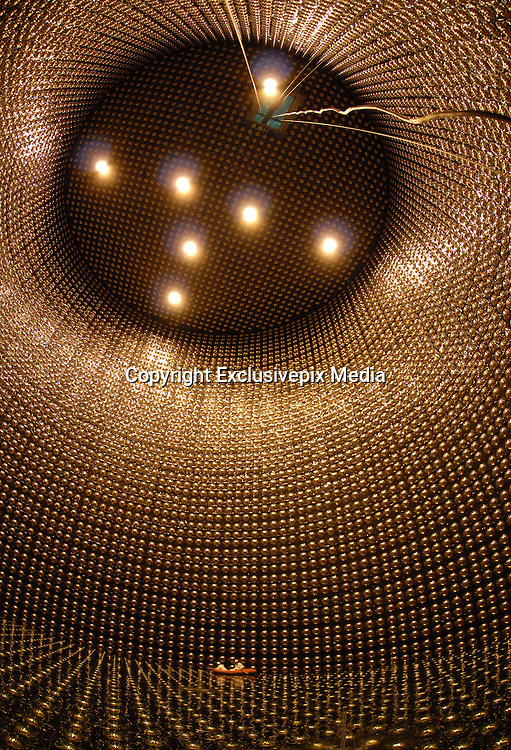