Along a lonely stretch of road between the small villages of Talala and Winganon in the US state of Oklahoma, lies what appears to be an abandoned space capsule. The letterings ‘NASA’ and ‘United States of America’ along with the flag is clearly visible on its side. However, it doesn’t take long to realize that the fallen spacecraft is actually a cement mixer.
The landmark came into being by a happy accident when a concrete-filled cement mixer truck, which was on its way to help build the bridge over Oologah Lake, had rolled over here in 1959. By the time a tow truck arrived to haul the cement truck away, all of the cement had hardened inside the mixer. Unable to handle the extra weight, the crew decided to haul only the truck and come back for the detached mixer later, which never happened. Eventually the locals discovered the relic, and the mixer became an easy target for anyone with spray paint.
For the last fifty years, graffiti artists have poured untold gallons of paint over the mixer, sending messages to their friends, or just showing. In September 2011, local artists Barry and Heather Thomas decided to turn it into a space capsule to celebrate the fifth anniversary of their wedding. The couple attached canning lids, garden hose, broken reflectors and other household items to the mixer to make the transformation look as real as possible. Before the latest incarnation the mixer was painted in a patriotic stars-and-stripes motif.
The Winganon Space Capsule is now a popular attraction. People driving along Winganon Road get down from their cars to pose near it and take pictures.
Heather Thomas hopes the new paint job would discourage kids to paint it over with graffiti. It has definitely survived, till now, although the thrusters at the bottom are gone.
©Exclusivepix Media 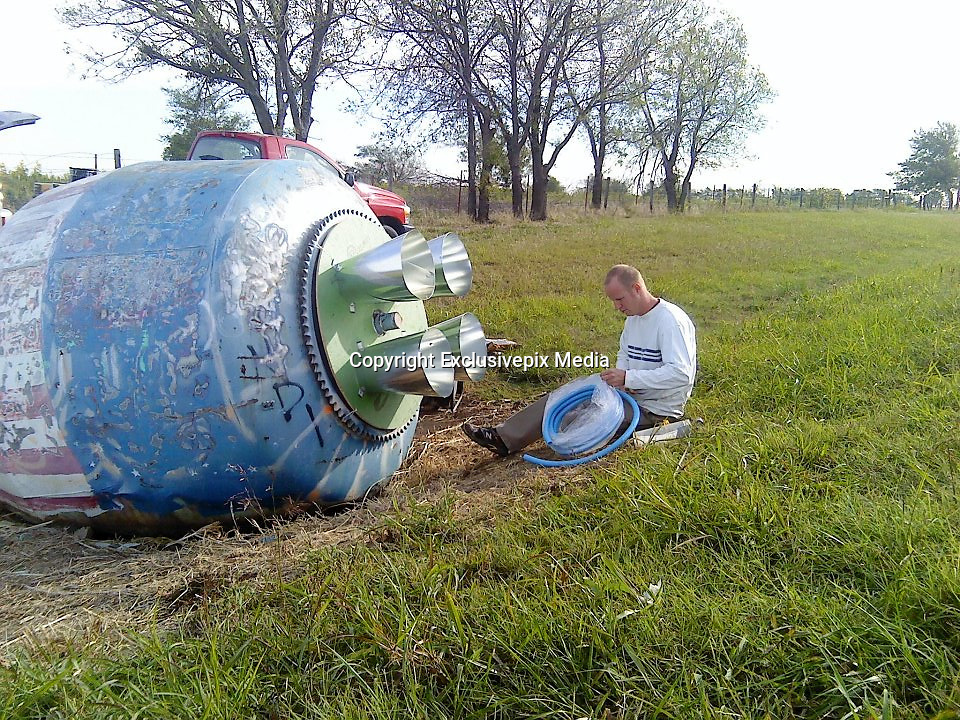