Ray Charles is the Internet's new favorite dog - a blind golden retriever puppy recently discovered by Buzzfeed.
The original story about Ray on Buzzfeed, posted last week, has now Born this past December, Ray was the only boy in the litter with four lively sisters.
At first, Ray seemed more timid than his sisters which led a vet to eventually discover that Ray was blind.
But he insists on his Facebook page that that's no reason to feel sorry for him.
'I can run and play and do everything else other dogs that can see do!' Ray 'says' on his Facebook page.
His blindness, however, was a bad omen at first since blind dogs have a much harder time finding the right family for adoption.
'My life then became a waiting game as to if I was ever going to find a home or not,' Ray's Facebook page says.
'Luckily my dad found out about me before it was too late, and saved my life!'
Ray now lives in Boston with two big brothers and a big sister, the family's other dogs Harley, Jack, and Maggie.
In March, Ray got his own Facebook page, which his owners use to post pictures of Ray dressed up in silly outfits, taking baths and playing with toys.
Since the page was created, the internet has fallen in love with the sightless dog - he has over 6,500 likes.
Love for Ray spread off Facebook where he was voted a 'dog of the week' at Modern Dog Magazine's website last month with over 3,000 votes.
Hometown fans in Boston have created a petition on ipetitions.com vying to give Ray the chance to drop the puck at a Bruins hockey game.
'Ray Charles may not have his sight, but we can still show him how much he means to all of us!' reads the petition.
And despite of all the attention, Ray seems to have remained relatively grounded despite his meteoric rise. According to Facebook, he just loves 'to make people happy and smile and bring joy to everyone around me!'
©Ray Charles/Exclusivepix 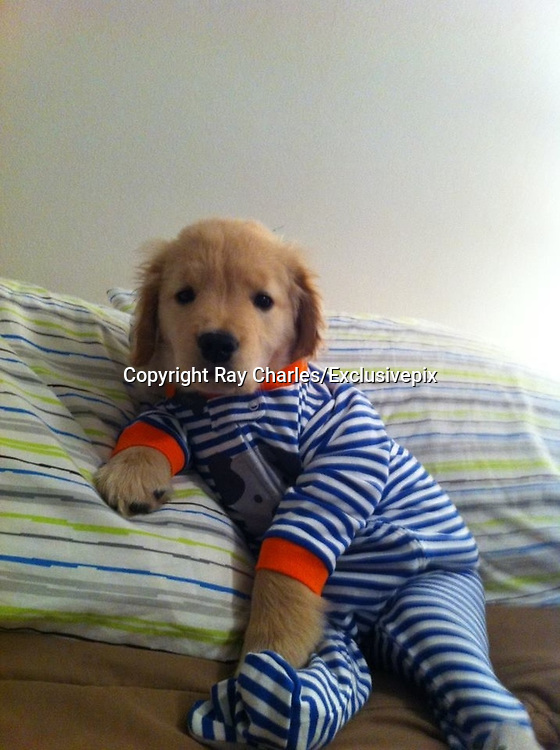