Pukka up! A kiss for the son who made Jamie Oliver’s family complete

It was the one missing ingredient in his recipe for the perfect family.
Jamie Oliver introduced his long-awaited son to the world with a tender kiss... or what the TV chef might have called a pukka pucker.
Buddy Bear Maurice Oliver (might he become known as Buddy Oli?), arrived on Wednesday evening in what mother Jools described as a 'hard and fast labour', which lasted two and a half hours.
The couple already have three daughters, living in what Jamie has referred to as a ‘totally oestrogen-filled house’.
As he stood outside Portland Hospital, Central London, with Poppy Honey, eight, Daisy Boo, seven, and 18-month-old Petal Blossom Rainbow, his joy at finally having a boy overflowed.
'It’s wonderful. I didn’t think I had it in me,' he said
When asked what inspired the name Oliver, 5, pointed to his wife.
Shrugging her shoulders Mrs Oliver, also 5, said: 'I just like the name Buddy, I thought it was sweet.'
The Maurice is in honour of her father, who died in 1997 after a stroke.
Oliver said: 'I never thought for a moment I would have a boy. All you can ever dream of is having a healthy child and that’s the best thing in the world.
'In a way it would have been easier to have had a girl. We’re not prepared for a boy – there’s no blue in the house.'
Dressed in jeans and ballet pumps, Mrs Oliver looked happy but exhausted.
Her husband announced Buddy Bear’s arrival on his Twitter page declaring: 'It’s a baby boy guys!!! We’re all very happy, mum was amazing and both are well and happy.'
Earlier in the year, he said if they weren’t able to have a boy he might adopt.
'I would consider it. We have three beautiful, healthy girls and we cherish them. But I’d be lying if I said it wouldn’t be great to have a boy.
'Adoption is such a selfless act. It’s humbling and beautiful to see.'
Photo Shows: Jamie Oliver , wife Jools and their fourth baby, Buddy Bear T 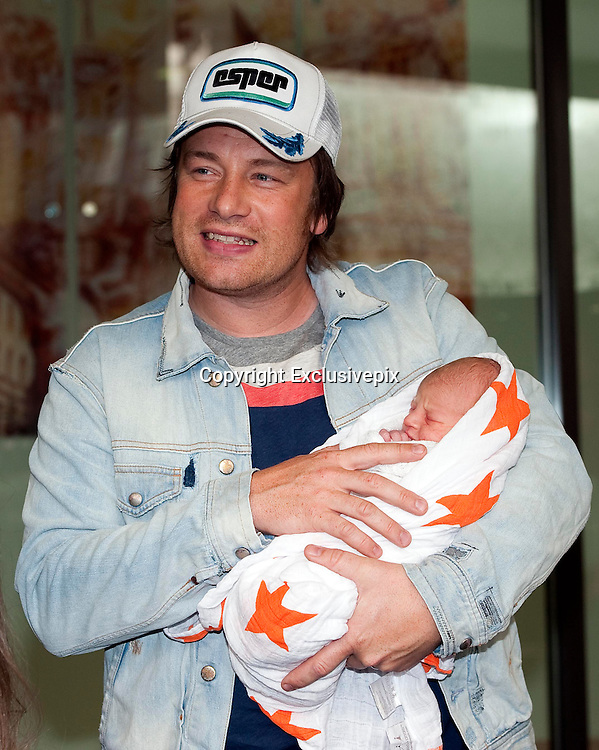