A 19th century Indian missionary once said: There are certain places that are rarely seen; and in those you will find a special sort of magic

Theyyam is one of those magical celebrations that takes place annually in South India.

It’s a religious dance-drama that takes place in just two districts of Kerala; in Kannur and Kasargod, and is celebrated during the months of December - February. Believed to pre-date Hinduism, Theyyam is said to be a corrupted form of the word Deivam meaning God and Aattam meaning Dance. The meaning of Theyyam thus becomes Dance of the Gods.

It’s a ritual art form at least 1,500 years old combining both religious and spiritual traditions; and Theyyam appear in more than 450 forms.

The male participants all come from the Dalit caste - that is the lowest caste in India, previously referred to as Untouchables.
Dalits have traditionally taken on the most anti-social and menial jobs, such as road-sweeping, cleaning sewers and refuse-collection.
Yet during the Theyyam season they give up these jobs and metamorphose into an incarnation of a God. They will not eat meat or fish, and are forbidden to sleep with their wives.

The right to perform as a Theyyam is inherited and passed down solely through the mother’s family; and only men may become a Theyyam.
It is not a profession or calling that can be adopted, and the transition from Dalit to Deity - becoming the Incarnation of the God - is only achieved after intense physical and spiritual preparation.

Before entering a village shrine, Theyyam artistes will lie on the floor of a nearby shed for for up to five hours beforehand while their acolytes paint the most intricate designs on their face, each element of which has a particular symbolism.
After donning the elaborate costume, their head-dress is finally put on, at which point for the first time, the Theyyam sees the reflection of himself in a hand-mirror.
An all-male orchestra of drummers 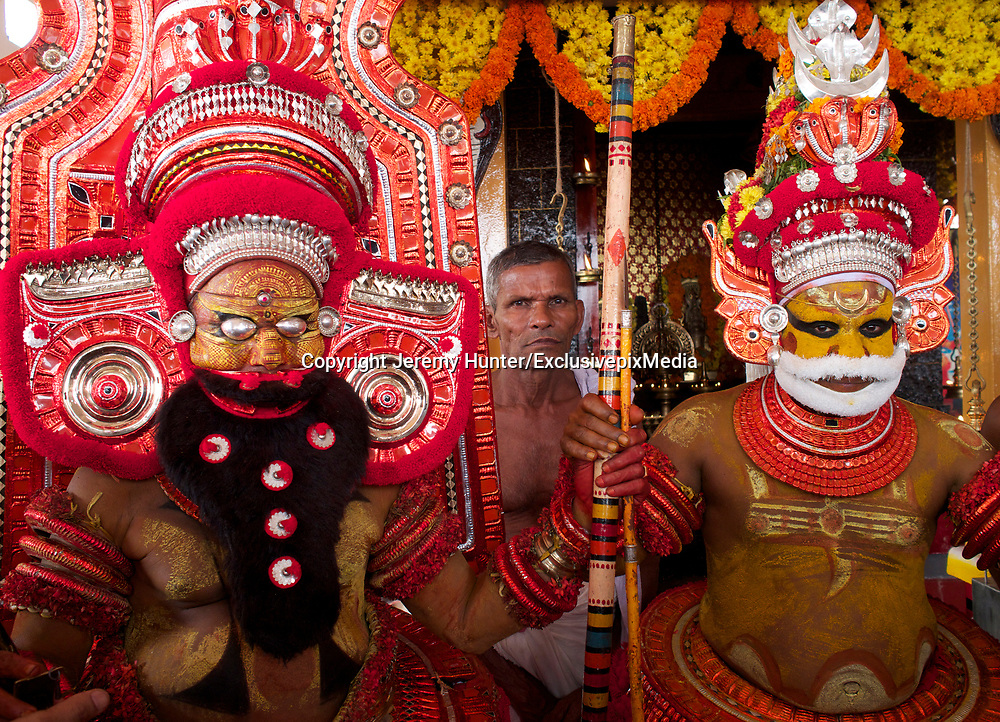