City Is Going Under Ground

The Russian city being 'eaten alive': Cars, buses, and trucks disappear beneath the earth as they are swallowed by giant sinkholes

They may look like stills from an apocalyptic horror film, but these images have become a daily reality for residents in a Russian city.
Citizens of Samara, in south east Russia, live in fear of the ground literally disappearing beneath them after huge sinkholes have started to appear all over their city, leaving devastation in their wake.
The yawning underground caverns are all believed to have sprung up in recent weeks swallowing cars, buses and claiming at least one life.
The sinkholes, some large enough to swallow an entire truck, are believed to have been caused by ground subsidence.
It is thought the holes have been caused as ice thaws and melts into the ground, with the excess water causing soil decay underneath Samara's roads.
The massive craters have appeared in car parks, busy intersections, by the sides of roads, and on major and minor thoroughfares.

It is believed at least one person has lost their life as a result of one of the crashes caused by the sinkholes.
The citizens of the city have now signed a petition urging authorities to find a solution.
Sinkholes are common hazards in mining regions, plaguing areas where miners have burrowed into layers of soluble minerals and accidental floods have followed.
But natural sinkholes can take thousands of years to form and vary in size.
They are usually the result of what are known as Karst processes, which occur when a layer of rock such as limestone underneath the ground is dissolved by acidic water.
Typically rainfall seeps through the soil, absorbing carbon dioxide and reacting with decaying vegetation. As a result, the water that reaches the soluble rock is acidic.


The acidic water then erodes the soluble rock layers beneath the surface creating cavernous spaces.
Then, when it is no longer supported because of the cavity below, the soil or sand over the limestone co 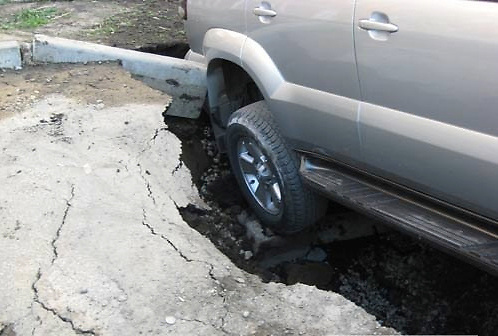