Are these the world's most painful tattoos? Ethiopian and Sudanese tribes show off their intricate raised patterns created using THORNS

Are these the world's most painful tattoos? Ethiopian and Sudanese tribes show off their intricate raised patterns created using THORNS

From delicate swirls of raised flesh to intricate dotted patterns, the scars that decorate the bodies of Ethiopia's Bodi, Mursi and Surma tribes are more than just the sign of an old injury.

For these aren't just any scars: They're an elaborate part of local culture and signify everything from beauty to adulthood or even, in some cases, are simply a mark of belonging.

But Ethiopian tribes aren't the only ones to embrace scarification. In Uganda, the Karamojong are famous for their elaborate scar patterns, while across Ethiopia's border with Sudan, Nuer men bear scarred foreheads and consider getting them a key part of the transition from boy to man. Now the stunning scar markings of Ethiopia and Sudan are the subject of an incredible set of photographs by French snapper, Eric Lafforgue, who travelled through the country observing cutting ceremonies and meeting the locals.

During a visit to the Surma tribe, who live in the country's remote Omo Valley, he witnessed a scarification ceremony, which involved creating the patterns using thorns and a razor.

'The12-year-old girl who was being cut didn't say a word during the 10-minute ceremony and refused to show any pain,' he revealed. 'Her mother used a thorn to pull the skin out and a razor blade to cut the skin.

'At the end, I asked her whether having her skin cut had been tough and she replied that she was close to collapse. It was incredible as she didn't show any sign of pain on her face during the ceremony as that would have been seen as shameful for the family.'

What's more, he explained, despite the pain, the girl herself initiated the ceremony as Surma girls aren't obliged to take part. 'Scars are a sign of beauty within the tribe,' he added. 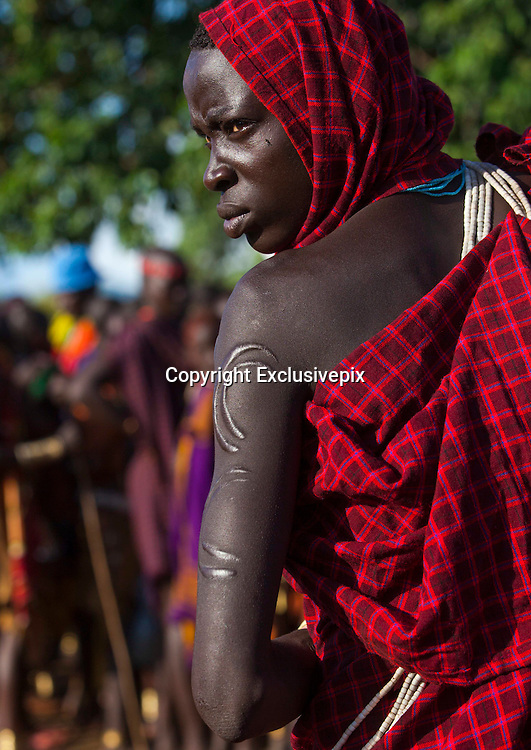