Beyond the Pyongyang metro...

Built in 1970s, Pyongyang Metro may soon become the best place for north koreans to escape « fire and the fury like the world has never seen » that promises Donal Trump. It includes only 17 stations on two lines, with a total length of 30 km. In Seoul it is about 300 km. Construction of the metro service began in 1968 and was inaugurated in 1973 by Kim Il Sung, the grandfather of Kim Jong Un. Before entering the platform, one must purchase a ticket and go through the checkpoint. The fare is cheap, only 5 wons, half of a US cent.
You have to validate your ticket at one of these automatic machines. But they did not work the day I visited. Instead, a train attendant checked was checking the tickets by hand. Like in so many others places, the visits of the Dear Leaders are immortalized by a red billboard telling the date they visited the place.
So you will learn Kim Il Sung used this escalator. You can also find out what he has done in his life, as the North korean propaganda set up a billboard every time
they visited a place. There are only 2 metro lines, so getting lost is not easy.
Each station is named after the revolution: Comrade, Red Star, Glory, Liberation, Signal Fire, Rehabilitation, Victory, Paradise, Restoration... not named after places though. Going down the 120 meters takes just few seconds but you feel like being in a movie as the revolutionary music and patriotic songs are played all around from the loudspeakers.
Everybody stays at his/her place, no one tries to jump the queue.
©Eric lafforgue/Exclusivepix media 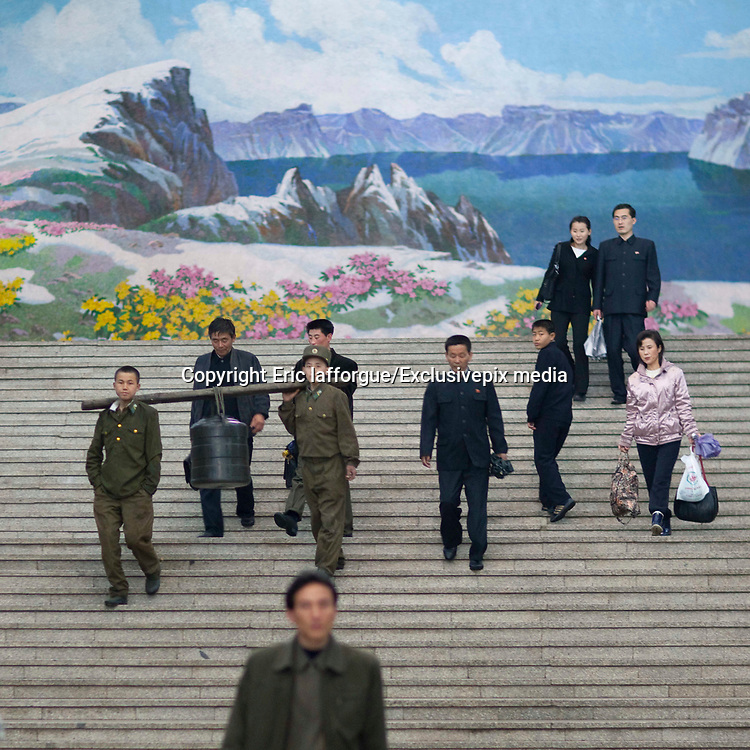