Brightly coloured graffiti scribbles and murals are usually found on grotty inner-city buildings.
But thanks to a new internet sensation which sees graffiti-clad girls uploaded revealing shots of themselves, this is one street art trend that has broken out of the mould.
And unlike the illegal vandalism, Graffiti On Girls has become an internet hit, with cheeky street-style art added to women's bodies and the photographs uploaded for all to admire.
Thousands of kinky girls have uploaded pictures of themselves with pieces of work scribbled across their breasts, buttocks and backs. Some have even had graffiti written across their entire body by friends and boyfriends - while one girl has a Bugs Bunny portrait across her breasts. Site owner Vince Prawns said: 'The trend is big. There's now an enormous community of people around the world posting pictures of themselves online.
'Some of professional models and artist whiles others are the "girl next door" types who just want to give it a try.
'There are big risks when you do graffiti on the street, but adding your tag to a girl is much nicer - it's all soft and curvy.' The 'graffiti on girls' trend requires either a friend or boyfriend to do the artwork while the female exposes her flesh. Some girls also put tags on themselves, but can't get into hard to reach places such as their back.
Water-based markers like those for outside are used to add the attractive design in a range of colours across the girls' legs or torso.
Vince added: 'The comment that comes up most often on is : "My two favourites things at one place : Girls & Graffiti". 'Graffiti on girls is exclusively for girls, so that means no body art and definitely no guys.
'There are thousands of pictures online of sexy girls painted by graffiti writers with real style. But we get just as many from girls that are simply too rude, and we've had to reject 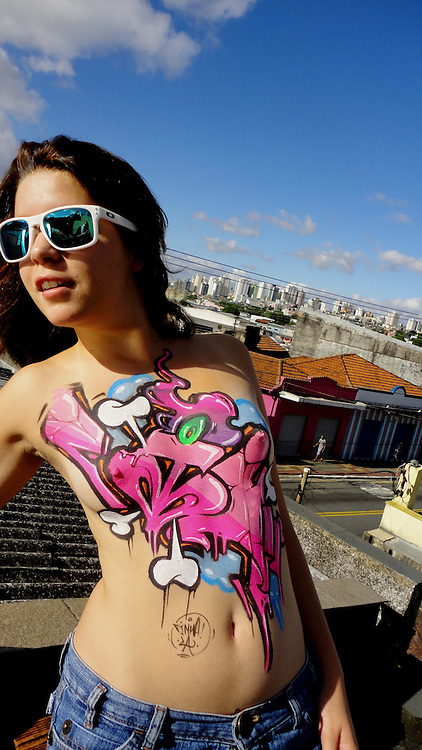