Hitting the high notes! China unveils another terrifying glass walkway... and this one is also a giant KEYBOARD that plays musical notes as you walk

Terrifying 'skywalks' have become a popular activity for Chinese tourists seeking a thrill.
But now local authorities in Hunan province have built the country's first glass walkway that plays music as you walk, in an attempt to soothe the fears of visitors.
The path, which is built along the edge of a cliff nearly 1,000 feet above ground, doubles up as a giant keyboard by responding to footsteps,
Tourists have already been pictured walking tentatively down the 180-metre long glass bottomed path, which is sure to get stomachs churning.
However, those brave enough to get up there are treated to panoramic views of the whole of Pingjiang County, designated an area of outstanding natural beauty.
The walkway consists of two layers of 12mm thick glass glued together and electronic components can respond to footsteps with 70 different notes.
The interactive path in the Shiniuzhai National Park is the first of its kind, although glass walkways appear to be cropping up all across the country recently.
Last month the construction of a walkway in the same scenic spot received widespread attention online after workers were picture walking precariously along wooden planks at the edge of a cliff thousands of feet in the air.
Pingjiang is already very popular with tourist for its Mufu Mountain range and the national park attracts thousands of visitors every year.
Local authorities have been trying to attract even more tourists by building a series of winding mountain paths and glass walkways in the region.
©Exclusivepix Media 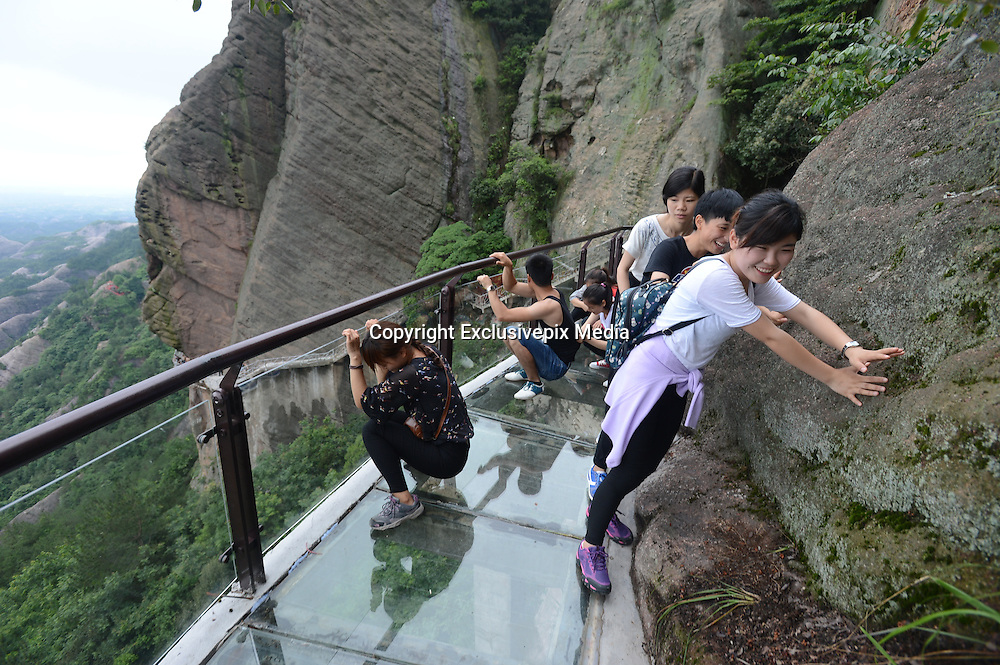