When Hugh Welch Diamond photographed psychiatric patients at Surrey County Hospital in the 1850s, he believed the camera was a new technology that could record things beyond human perception. In one way he was right;
photographs could capture objects invisible to the naked eye. He was mistaken in believing that abstract ideas would freely offer themselves to the photographer. A photograph of a psychiatric patient was not a photograph of their illness.

The mistake wasn’t his alone. At Salpêtriére hospital outside of Paris, doctors and photographers including Guillaume Duchenne, Paul Régnard and Désiré-Magloire Bourneville began photographing psychiatric patients with much the same
idea in mind. Duchenne took a series of photographs of a Parisian shoemaker suffering from Bell’s palsy. In order to record emotions Duchenne attached electrodes to various parts of the patient’s face to trigger muscular responses.
The shoemaker’s subjection to science wasn’t entirely in vain. Duchenne was able to determine that emotional displays activated specific muscles, if a person smiled without using particular muscles that smile was either false or it could indicate a neurological disorder.

These eerie images taken at a French asylum in the 1880s, Each carte has a small pin hole in the top left. This means they could have been placed on a wall or had a loop of wire holding them together.

they would have been used to help student doctors identify patients or their illnesses. Photographs of patients at asylums were common in the 1880s. The photographic team led by Albert Lone at Salpetriere Hospital in Paris is famous for the work done under the head of the asylum, Jean Marie Charcot. Hugh Welch Diamond's work is also well known.

iIlnesses such as epilepsy and STDs were typically treated at asylums.
©one mans Treasure/Exclusivepix Media 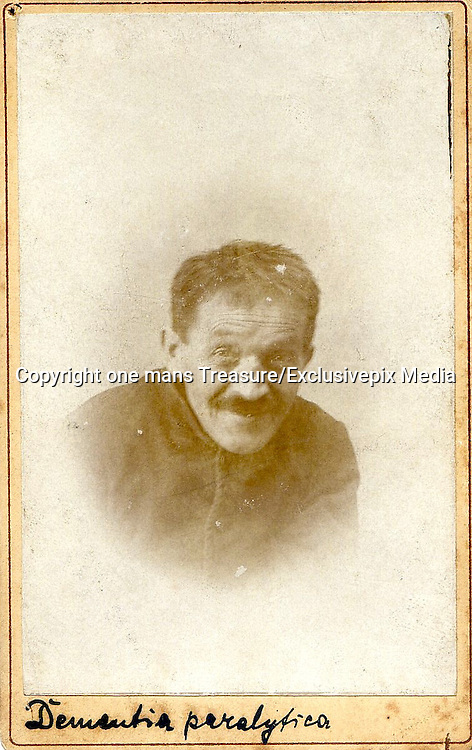