Just look at me now! Incredible transformation of the 'mummified' orang-utan who has been nursed back to health

A baby orang-utan left to die in a filthy cardboard box in the sun in Borneo is showing further strong signs of recovery less than two months after being saved by a British charity.
Rescuers said the baby ape's appearance is now 'beyond recognition' after he was found so lifeless that at first they thought he was dead.
Lying corpse-like with his arms folded across his chest, his grey flaking skin and lack of hair made him look 'almost mummified' in his urine-soaked box.

The baby, who officials named Gito, was found in the village of Hamlet Giet in Simpang Hulu district, 105 miles from the orang-utan rehabilitation base in West Borneo.
Dehydrated and malnourished after being fed entirely on condensed milk, Gito was taken to the International Animal Rescue (IAR) clinic by motorbike in an arduous nine-hour journey.
During a medical check, Gito was feverish, with stiff hands and feet. He was unable to sit up on his own, suffering from diarrhoea and from sarcoptic mange - a highly contagious skin disease.

To help relieve him, coconut oil was massaged into Gito to soothe and soften his itchy skin. And he was placed on a drip to help rehydrate him.
Now, less than two months later, East Sussex-based IAR said Gito is looking 'healthy, happy and alert' - and is even sporting two front teeth.
Alan Knight, chief executive at IAR, said: 'Considering the condition little Gito was in when he was rescued, his recovery has been remarkable.
'But the team at our centre in Ketapang are experts at caring for sick and injured orang-utans and have been hugely successful at saving a number of seemingly hopeless cases.'
Although Gito is not as hairy as he should be, his skin is smooth and supple and there are good signs that his coat is growing, IAR rescuers said 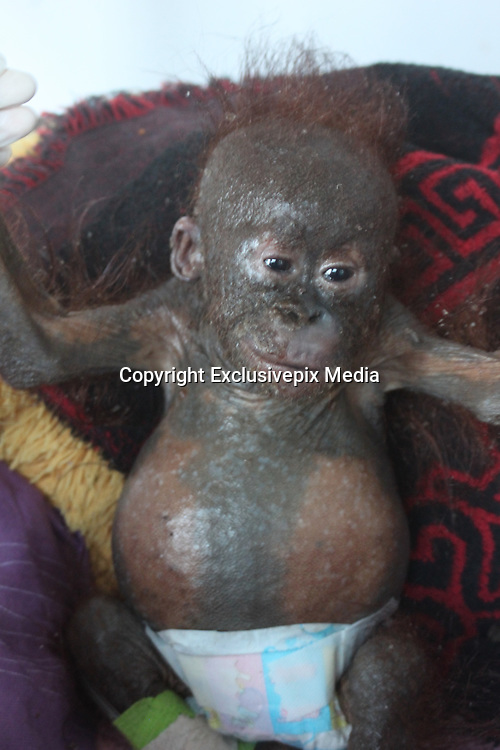