This is the SHOCKING brutal moment two 9 year old Muay Thai boxers knock each other out in brutal fight in Thailand's sex capital Pattaya.

Tourist Jack Ryan, 41, from Manchester took the footage while on his way to walking street, Pattaya's sex capital hotspot where thousands of prostitutes work.

He decided to walk into a group of beer bars just before the famous walking street after seeing a huge boxing ring with young kids fighting in the middle of these small bars where prostitutes sit and wait for foreign customers, "you can buy sex here for as little as 20" Jack said.

The shocking footage shows two young kids aged around 9 years old fighting brutally, the child in the black shorts punches his opponent giving him left and right hooks, he then elbows and kicks his opponent, pushing him to the corner were he releases a flurry of punches.

The young opponent in the red and gold shorts then fights back with four hard kicks to the head and then the 5th kick knocks the child in black shorts to the floor. You can hear women in the background scream with emotion.

After the ref briefly checks on the young boy, the fight starts again. The boy with the red and black shorts un leashes many punches and knees his opponent in a shocking fight which knocks the young boy out once again.

He continues "I was surprised to see how brutal this was and took a short clip before one of the adult fighters begin to shout at me, so I quickly left"
©Exclusivepix Media 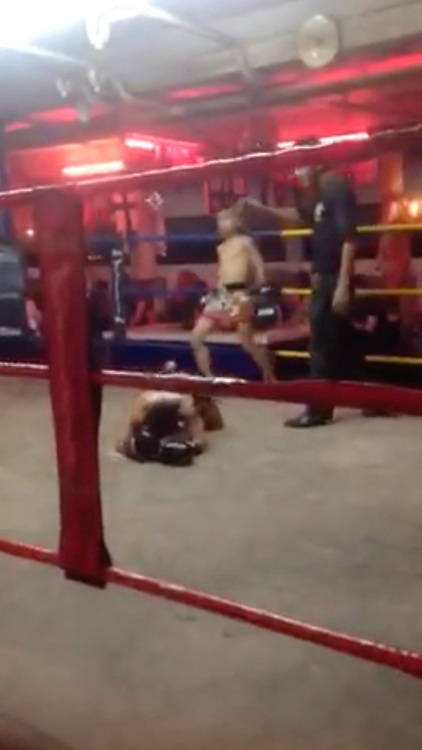