Princess leia topless art class
Its the ultimate art class for geeks the chance to sketch Princess Leia from Star Wars in and OUT of her gold slave bikini. The scene where she is chained up by Jabba the Hutt was made immortal by Carrie Fisher and shocked fans at the time. Since then, the look has been copied millions of times, but one art class decided Star Wars fans should get the chance to get under the skin of the scene, by showing, well, a lot more skin. It was the brainchild of Molly Crabapple, the founder of Dr Sketchys Anti-Art School. The 28-year-old from Brooklyn, New York City, said: Hey, Art Wookies! Do you remember that scene in Star Wars Episode VI: Return of the Jedi where Leia is captured by Jabba the Hutt and he keeps her on a chain in a metal bikini? Yes you do! Don't even try to lie to me! It's a perfectly normal and natural part of every nerd's sexual development and is nothing to be ashamed of. Anyway, to make a long story short, Leia strangles Jabba to death with the chain so instead of being chained to a bloated slug monster, she's chained to the corpse of a bloated slug monster until R2D2 cuts her free and she makes her escape. But then what happened? The next time we see her, she's aboard the Millenium Falcon. So what happened on the way from Jabba's lair to the Millenium Falcon? I bet you never even asked that question! Well, luckily for you, we did and as it turns out, before she made it into space and changed out of her slave outfit, she posed for a life drawing class. Now you can see this lost chapter from the Original Trilogy, with the incomparable Justine Joli as Leia Organa. Justin Lussier took the pictures. Geek heaven indeed.
©Exclusivepix 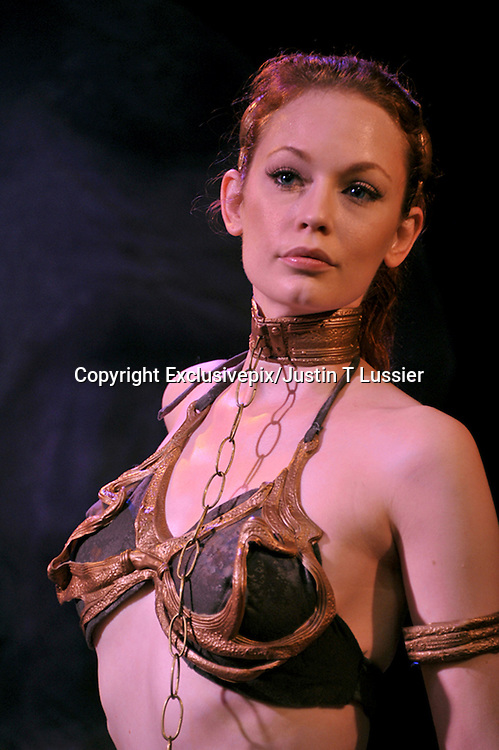