The Living Ghosts of Benin

*Villagers believe if they are touched by an Egungun, they will die

*Having any contact whatsoever with an Egungun can prove deadly for both the Egungun and the other person, so each Egungun is accompanied by a 'minder', also a member of the Egungun society, who carries a long and substantial stick to drive individuals away...

BENIN is a small country sandwiched between Nigeria to the East and Ghana and Togo to the West. Formerly a French colony known as Dahomey, little is known about the country prior to around the 15th century when it was occupied first by the Portuguese, then the British, Dutch and lastly French who ousted King Behanzin and took control in 1894.

The Egungun are one of Benin’s Secret Societies who appear as masked men representing the spirits of the Living Dead. They are Living Ghosts, a conduit to the ancestors. Their role in village society is to settle local disputes, and their knowledge is often consulted in times of trouble within their village. The Egungun speak in a high-pitched and altogether un-human and unsettling falsetto tone, similar to the voices used in a Punch-and-Judy show, and in a language that is not understood by other villagers; they are always accompanied by drummers. Some say they derive their name from the Yoruba (Northern Nigerian) word for "bones" or "skeleton," but in Yoruba, Egungun also means "masquerade.” Egungun arrive in villages, pass judgements and give advice. Their word is final as their advice is a direct word of the Gods.

Each Egungun appears as a robed figure - giving the impression that the deceased is making a temporary reappearance on Earth. This impression is enhanced by the voluminous costumes of the Egungun; the cloth and design they use expresses the power of the ancestor. In one village I came across an Egungun with the stature and form of a child. I enquired as to his age (all Egungun are male). As soon as I’d asked I realised that 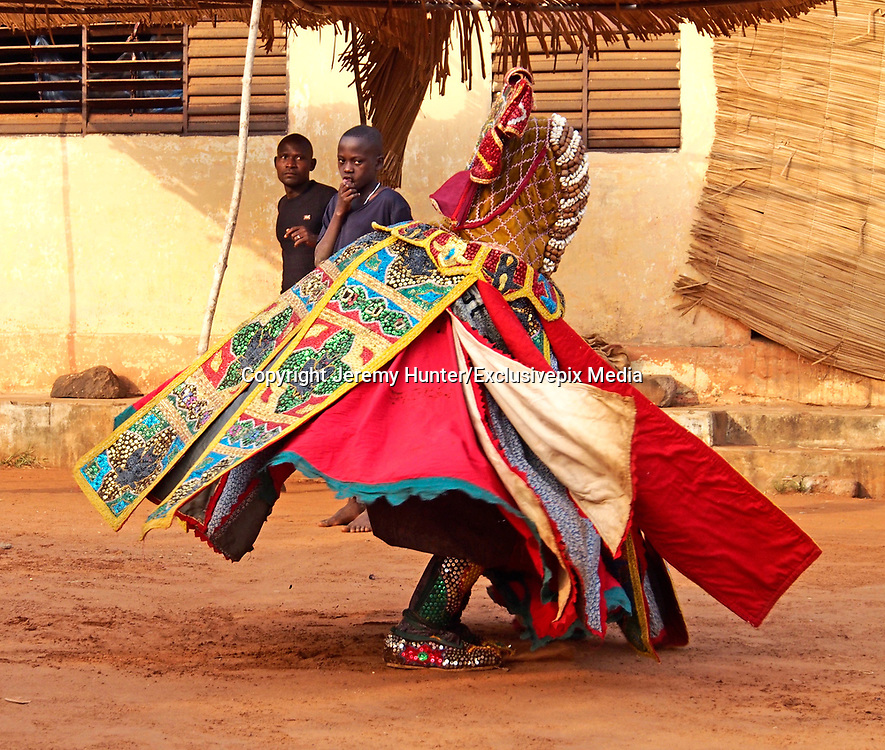