Swollen breasts, the constant urge to wee and broken nights are problems expectant mums know all too well and men have been unable to share - until now.

So what happened when three dads became nine months pregnant?

Jason Bramley, Steve Hanson and Jonny Biggins are discovering exactly what it's like to have a baby on board by wearing pregnancy suits to honour mums in the run up to US Mother's Day on Sunday, March 15.

While most mothers would be happy with a bunch of flowers, the married dads, who are behind a new personalised Mother's Day book called Book Of Mum, are wearing pregnancy suits all day every day for a month.

Steve, 46, who is married to Kate and has a 12-year-old son, called Saul, said: 'Every day things like putting on your socks becomes a monumental task.'

The trio, who are from England but all work at an office in Barcelona, are wearing their bumps to work, to the pub and to bed and are only allowed to remove them to wash.

Jason, 44, who is a father-of-one mused on day five: 'I wonder why pregnant women don't use wheelchairs.'

But it's not all fun and games.

The 'empathy belly' comes complete with fake breasts and weighs two and a half stone - the average weight of a full term baby bump.

It is designed to put pressure on the bladder, stomach and lungs, and cause abdominal distention and the inability to get comfortable.

'On day three I didn't sleep a wink, I just couldn't get settled,' said company dirctor Steve, from Doncaster.

'I tried to make a small city out of pillows around my bump. My boobs, which at first were quite a pleasurable novelty, soon became about as welcome as a fart in a spacesuit,' he added.

'They were way too warm and hung on my arm, sending it to sleep and waking me at the same time.'

By day three the constant swinging motion of his belly forced Jonny, 45, from Surrey to visit his local pharmacy and seek medical hel 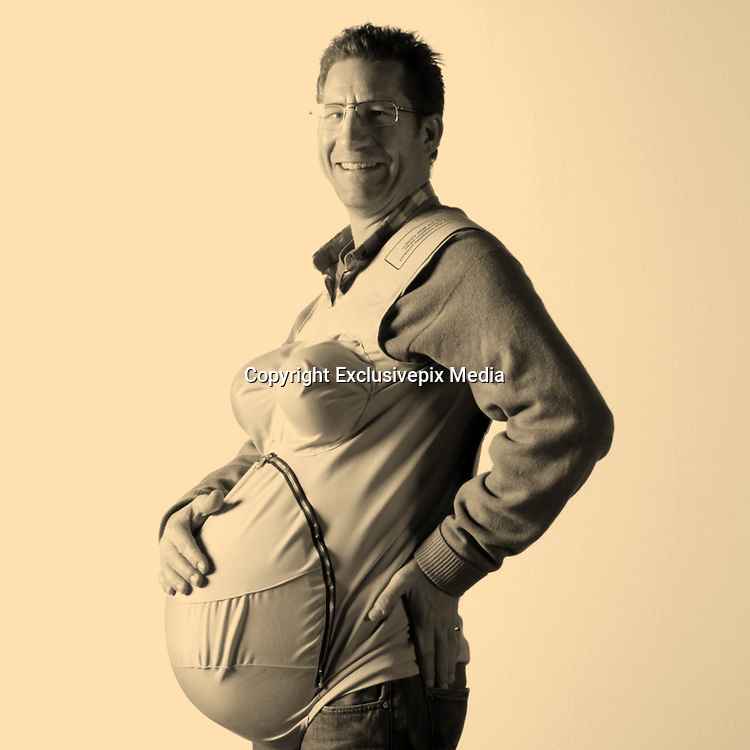