Prepare for a major eye-roll: Three imaginative young men in New York have dreamed up — and created — an industrial-strength selfie stick, big enough to support an entire laptop.
The Macbook Selfie Stick functions just like a smartphone selfie stick — except that it can fit a full-size Macbook computer in its grips.
And while the invention will likely seem ridiculous to many, it's worth noting that so did the original selfie stick, once upon a time — and now the tech accessory has become so ubiquitous that theme parks and museums have been driven to ban them.

However, early adopters can't exactly buy the photo-taking tool just yet — and in fact, there only seems to be a single prototype.
Created by artists Moises or Art404, John Yuyi, and Tom Galle, the Macbook Selfie Stick is, at this stage, still just an art project.
But while the trio may be trying to make some sort of statement about society — that our culture is too selfie-obsessed, self-obsessed, or tech-obsessed — it's quite possible that their plan will backfire.

In a series of images posted online, the group and a few volunteers can be seen using the Macbook Selfie Stick out and about in Manhattan.
They pose for pictures, their laptops held out on a pole several feet in front of them, in places like Times Square and Washington Square Park.
In several of the snaps, crowds of tourists can be seen nearby, and many seem unfazed by the spectacle — sometimes too busy taking their own selfies to even notice.
A few, though, look on with bemused expressions — even in Times Square, where strange and never-before-seen scenes are, actually, seen every day.

Most people are probably quick to write off such a ridiculous idea — after all, carrying around a laptop and hoisting it up for a picture is certainly cumbersome, with or without a selfie stick.
However, not eve 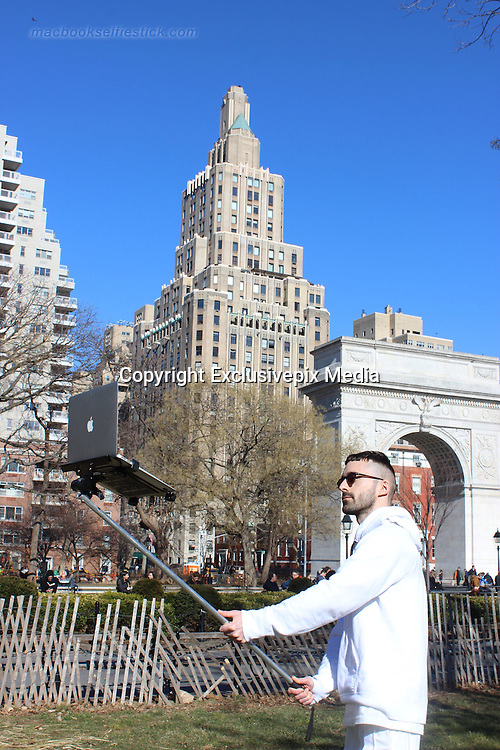