Built in 1954, the Beira Grande Hotel was once the most luxurious hotel in Africa The giant complex had around 120 suites, a cinema, an Olympic swimming pool, a helicopter pad, restaurants, a bank, a post office - it was a city in itself. Since shutting down, this colonial
dream has become a nightmare. After being used initially as military
base during the civil war, the squatters moved in. Thousands of impoverished people now crowd the Grande Hotel, it being the only place they can find shelter. The living conditions are atrocious.
Drugs, disease, and trash are ubiquitous. People have removed much
of the plumbing, electrical, windows and even concrete to sell on the black market. This weakens the building but provides them with another meal. The parquet floor was used as fuel for cooking, so all
that is left now is the cold, unwelcoming structure they call home. Children play around open elevator shafts with no elevator in sight.
"No one knows when the building is going to collapse,
" says one resident, Its going to collapse on top of our poverty"
Despite the abhorrent conditions, there is an element on community here. All are poor, but poor together. Newcomers are always welcome and mutual respect is one of the few laws in this house of misery.
It was really the pinnacle of luxury, meant for wealthy businessmen and tourists. For its massive size, 120 rooms is really not much. Turns out there was no demand so they shut it down in 1963. It never made a profit. After closing, the pool still remained open. The Mozambican Olympic Swimming Team trained there. Now it used by inhabitants for bathing or washing laundry. After the civil war, it became a refugee camp. The people who live there have mostly emigrated from the mine-filled countryside. As of 2008, it housed 1,077 inhabitants with large families sharing one room. Now there is between 2,000 and 3,000 inhabitants about 350 families. They occupy not only the rooms 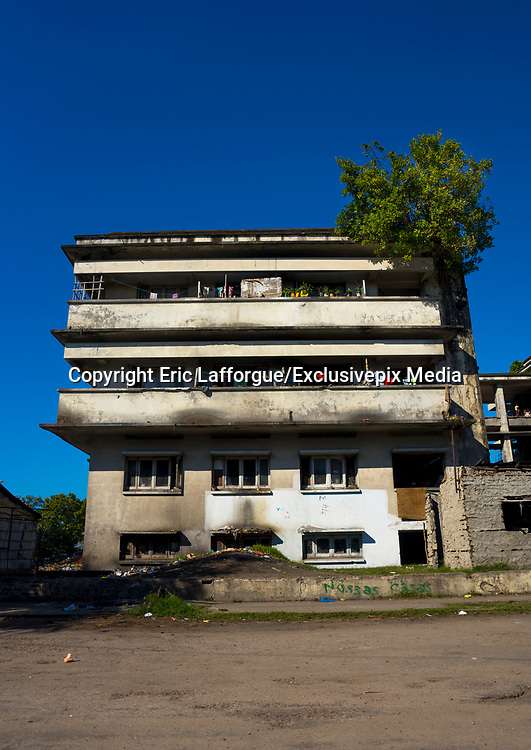