Stained-glass mini isn't a pane to drive at all: British designer creates driverless vehicle which features a bed and was inspired by the Durham Cathedral

Stained-glass mini isn't a pane to drive at all: British designer creates driverless vehicle which features a bed and was inspired by the Durham Cathedral

A British designer has created a bedroom with a view - and when you wake up, you may well be at your chosen destination.

Dominic Wilcox designed his vision for the future of transport - a stained glass covered driverless car which contains a bed - for an exhibition at the London Design Festival last week.

Mr Wilcox said by 2059, he believed it would be 'statistically proven' that computer controlled driverless cars were safer than those driven by people. At which point, he said 'we will simply require a living space on wheels'.
Mr Wilcox said his idea for the stained glass shell of the vehicle came out of his 'interest in taking what I admire from objects of the past and merging it with technology of the future, to create a new future'.

And it followed a visit to the Durham Cathedral where he was 'struck by the wonderful stained glass'.

Mr Wilcox said: 'I wanted to bring the visual experience I had in the cathedral into a new, contemporary, three dimensional form.'

He said the hand cut glass on the car used the same technique used to make the famous Tiffany lamps.
The glass shell is supported by a computer designed and manufactured frame which brings together 'bespoke craftsmanship with the technical precision of computer aided design'.

Mr Wilcox said the car also took design inspiration from the original mini launched in 1959, using classic mini tyres, and the boot handle, which is now used as a handle to open the glass shell to get inside.
©Dominic Wilcox/Exclusivepix 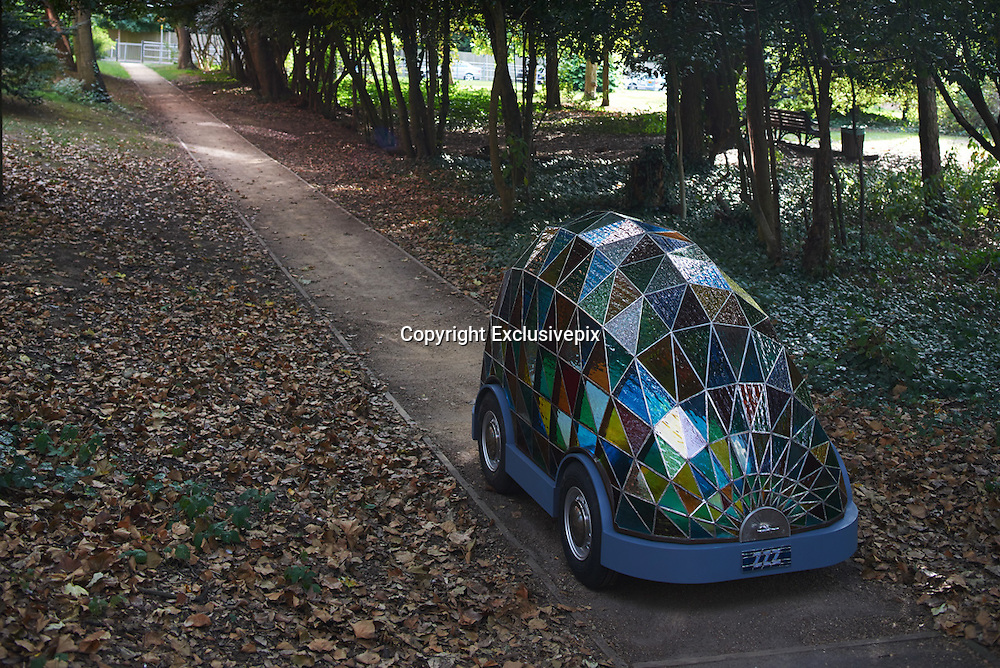