They are bright green, adorable and so tiny that they fit on the end of a finger or pencil: More than 20 baby chameleons make a big impression after hatching at Taronga Zoo

They are bright green, adorable and so tiny that they fit on the end of a finger or pencil: More than 20 baby chameleons make a big impression after hatching at Taronga Zoo

They are bright green, so teen tiny that they sit comfortably on a pencil or fingertip - and too adorable that is it hard to believe they are actually real.
New veiled chameleon hatchlings have just popped out into the world at Sydney's Taronga Zoo and their almost cartoon-like looks are already winning the world over.
Two of the final three clutches of the eggs have already hatched this week with the third in the process of producing the last of the seriously cute critters.
More than 20 baby chameleons, which are currently only 5cm long but will grow to about 30cm, are the first born at the zoo in over five years.

Housed in a special temperature-controlled area behind the scenes at Taronga's Reptile World, the hatchlings have begun feeding on crickets and turning on a bright green colour display for keepers.
Reptile supervisor, Michael McFadden said the chameleons, which are native to Yemen and Saudi Arabia, would be mature and able to showcase their full colour palette within a year.
'Veiled chameleons are a visually amazing species that we're fortunate to have at Taronga,' McFadden said.
'While they're not endangered, they do play an important educational role in helping us to get people excited about reptiles and reptile conservation.'

Normally a shade of green or brown while at rest, the chameleons can change colour when frightened, courting or defending their territory.
'You'll see shades of green, yellow, aqua and even very dark brown or black depending on their temperature, mood and reproductive behaviour,' McFadden said.
'However, they don't change colour to match a particular background like you see in cartoons.'
Built for a life in the trees, the veiled chameleons also have zygodactyl feet that can easily grasp branches, their eyes can rotate independently and look in two directi 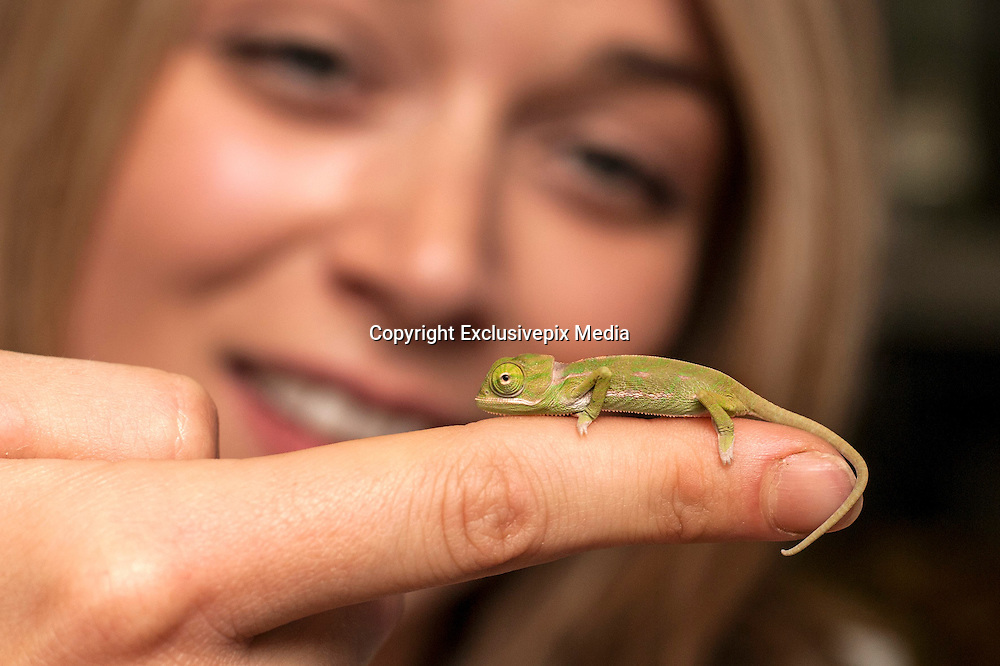