It's the dilemma that haunts every British homeowner: how safe are my children from a zombie apocalypse?

A Leeds merchant has finally answered public concerns by making a undead-proof shed - which will set you back a mere £69,995, plus £20,780 for installation, CCTV, riot gear and solar panels.

The so-called Zombie Fortification Cabin also has an escape hatch, an interior garden, weapons storage and a 360-degree vantage point, all with a ten-year anti-zombie guarantee. A flamethrower or water cannon, however, will cost you extra.

Designed just in time for Halloween, the shed - ZFC1 for short - has not yet had any buyers, but that hasn't stopped it attracting a wide range of reviews on its manufacturer's website.

One, Shaun of the Dead, called it the 'Winchester of Log Cabins' adding: 'In my time I’ve had little respect as an electronics shop employee, with no real direction in life. But when I bought this Zombie proof log cabin I became the envy of all my neighbours!

'It’s big enough for me as well as my girlfriend and rather vulgar unemployed best friend (who could quite easily be mistaken for a zombie!). With this, any potential zombie apocalypse which could overwhelm the town, I'll have a nice cup of tea and wait for it all to blow over.'

Not everyone was happy, however. A disgruntled Roger Rotter the Zombie wrote: 'I officially HATE this zombie proof log cabin!!

'Having roamed our way through the land mines, in just about one piece, a cluster of us avoided the flamethrowers and made it to the walls. No matter what we tried (eating through the walls, climbing to the roof etc) we just couldn't break in.

'Unfortunately, as time wore on it became obvious this was a lost cause and some 28 days later we gave up.'

The bizarre idea was dreamed up by Leeds firm Tiger Log Cabins, and although there haven't yet been any sales, there have been some allegedly serious 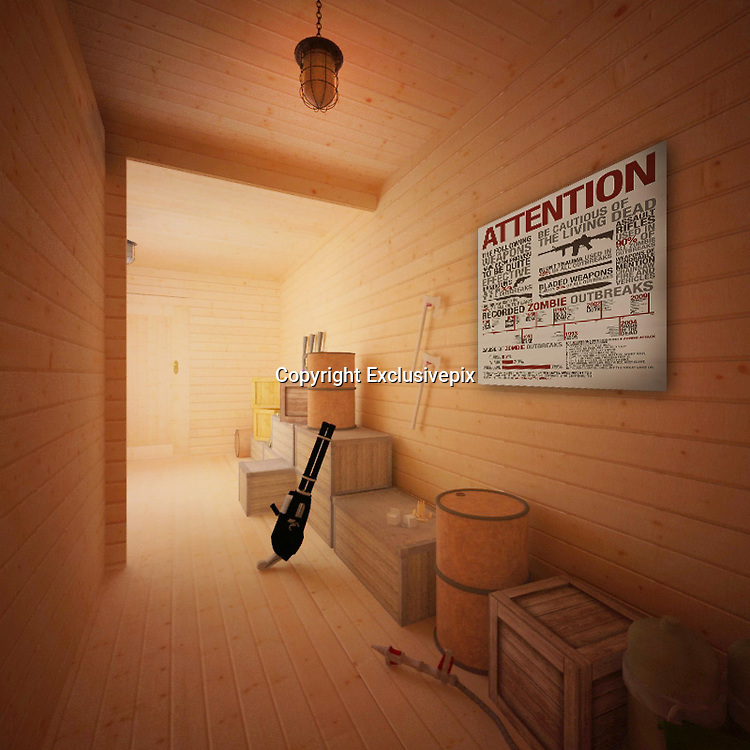