Five hundred years ago when the Incas were expanding their empire over the highlands of the Andes, they developed an incredible network of roads to move armies, people and goods quickly and efficiently over the mountains. But the landscape was treacherous comprising mostly of high peaks and deep valleys, which meant they needed bridges, and lots of them.

The bridges were an integral part of the incredible Inca road system that stretches for 40,000 kilometers, from modern-day Ecuador to Argentina. Depending upon the availability, the bridges were made of a variety of materials – wooden logs, stones, floating reeds or hand-woven from straw and tall grasses that grew on the high Andes. These bridges had short lives and needed to be replaced every few years. After the last of the Incas disappeared in the early 17th century, so did almost all of these bridges. Only one has survived, thanks to the effort of the local villagers who rebuild it each year using the same technique used by their Inca ancestors.

The last remaining Inca rope bridge is the Keshwa Chaca that spans the Apurimac River near Huinchiri, Peru, in the Province of Canas. The bridge is 148 feet long and hangs over the river more than a hundred foot below.

The bridge consists of five parallel ropes twisted from the fibers of the cabuya or maguey plant, and are about four inches thick. The floor or walkway is of small sticks and canes, fastened transversely with raw-hide strings. In ancient times, Indians coming from Andahuaylas and other districts had to pay tolls to use the bridge. So they usually brought cabuya leaves, where it grows, to pay toll with. These were prepared and made into ropes by the custodians of the bridge. The responsibility of the bridge’s maintenance might also have been thrust upon the participants as a form of tax. Today, the residents of the region keep the ancient tradition and skills alive by renewing the bridge annually, every June. 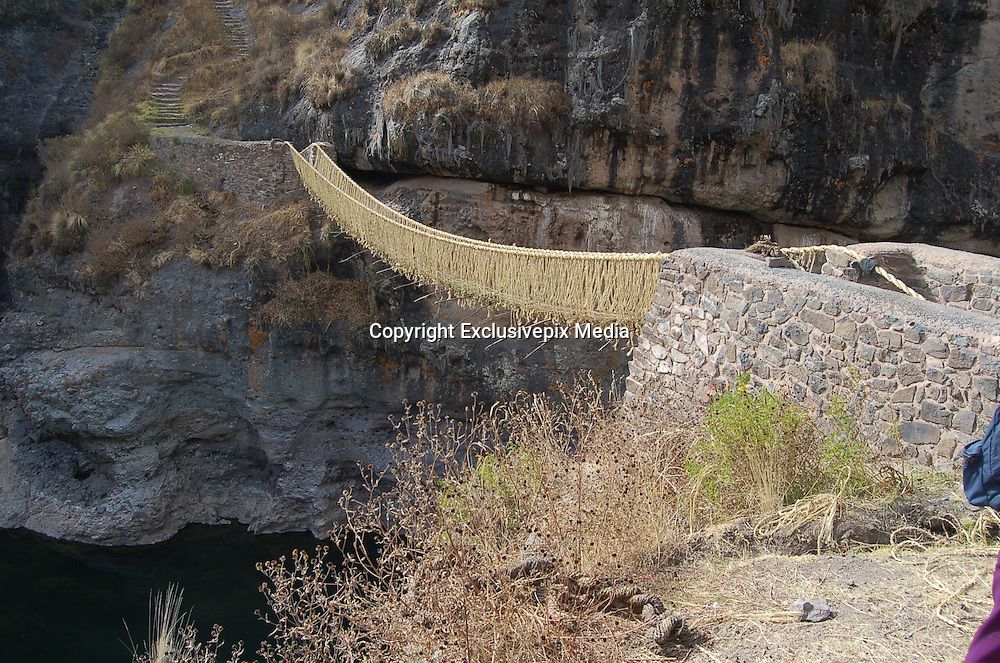