An ailing goldfish facing near certain death after being struck down by a tumour has made a remarkable recovery - after its owners took it to their local vets.
Bob had been struggling to swim in his tank for a number of weeks after developing a lump on his fin.

And, with most goldfish normally not living much older than 15 years of age, the 20-year-old pet’s chances of survival did not look great.

However, Bob’s owner’s opted to operate on the three-inch fish - who they consider part of the family - after learning of their local vets’ success operating on exotic creatures - including a constipated goldfish.

And, after a delicate operation at Toll Barn Veterinary Centre in North Walsham lasting just half an hour, he made a full recovery and returned home the same day. Dr Faye Bethell, who used micro-surgical equipment to carry out the procedure, said: “The option was to remove the lump or put him to sleep and now he is doing brilliantly. They (Bob’s owners) were really, really pleased because the goldfish is older than their children and is considered part of the family.”

The operation, which was carried out on a special operating table, involved feeding anaesthetic water into Bob’s mouth through a tube and using a miniature heart-rate monitor to check he was asleep before cutting out the lump using tiny forceps and scissors.

Dr Bethell, a director of the centre, said: “It’s pretty complicated because everything is so small and they don’t have a massive volume of blood so have to make sure they don’t lose too much blood.

“We’ve done several (operations on goldfish) but this one was the oldest fish we’ve operated on. We keep them wet throughout using their own tank water so they don’t dry out.” But she added: “He is back home and enjoying swimming properly. The operation took about half an hour and he was returned to his owners the same day.” 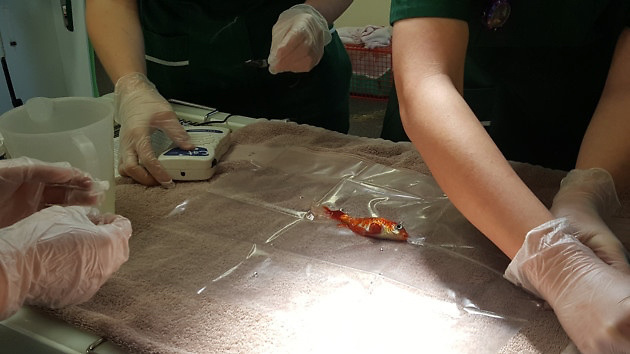